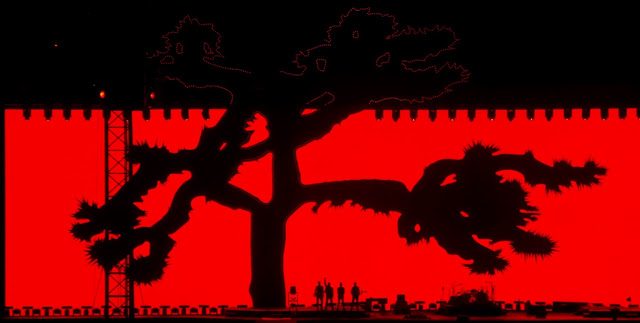 This review is more for my personal records than anything else, but some of you might enjoy reading it. As usual, it will be bilingual, so apologies for those that can’t read one of the two languages. Given how long it took me to organize the photos, I understand why it’s taken months for me to do this. Be warned, it's long.

I had awesome company for this tour. For Houston, Daniel bravely drove with me for hours and hours in order to attend our first U2 show together. Once there, we met Natacha and her friends to find a great spot on the floor. Close enough to see the band well, but not so close that we couldn’t enjoy the magnificent screen. 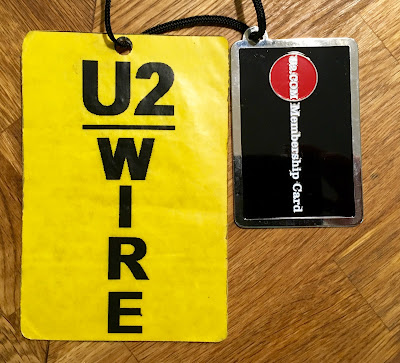 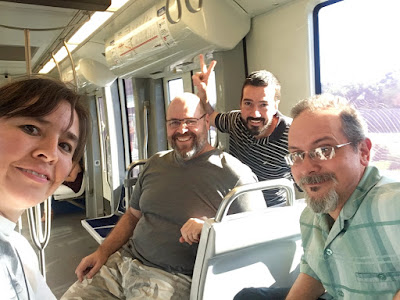 For Dallas, we made a family weekend trip and I got to enjoy a show with the people I love the most: my husband (our third show together), my mom (second show together), and my daughter (super exciting first rock show for her). Our seats were way on the side (and to think I used my code to get them!) so the screen was not nearly as enjoyable. The good part is that we got awesome views of the band, we were pretty close. 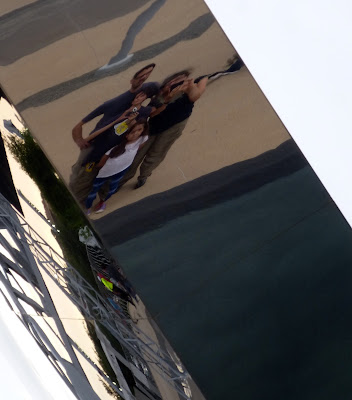 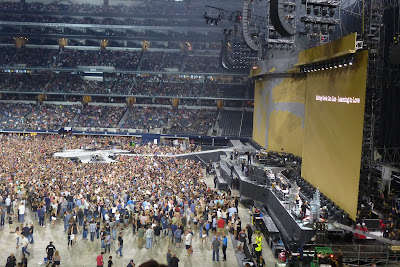 I have to say, closed roof football stadiums are horrible music venues. I know Texas is hot in May, but I would have gladly suffered the heat to avoid the bouncing sound. Also, the traffic to get in and out of there is pretty bad, at least in Houston we used public transportation one way.

I always cry at some point during U2 shows, mainly when I hear certains songs for the first time. I have heard ‘Where the Streets…’ in EVERY single U2 show I have been to (they skipped ‘With or Without you’ Once), and that one never made me cry before, but this time… it marked something else, the beginning of a magical moment that I was lucky to live. I’ve never cried as much as in the Houston show, it was embarassing, but I don’t regret it one little bit. 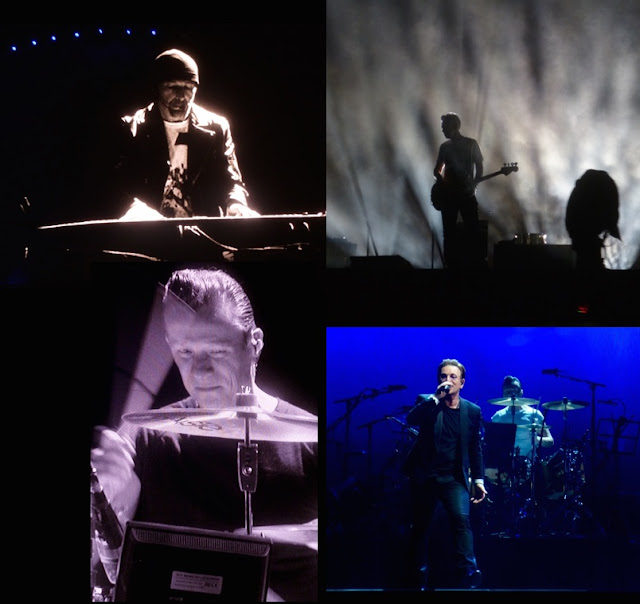 Before it comes on, the screen looks like a ginormous cardboard wall with a huge tree painted on it. there is a second tree in the middle of the floor made by a catwalk and a  little stage. After the opening act, a series of poems are projected on the screen, so it is kind of surprising when four little figures walk on the catwalk to the little stage and proceed to play an acoustic set of old classics: Sunday Bloody Sunday, New Year’s day, Bad (l cry every time), and Pride. During Pride, the “I have a dream” speech is projected on the side of the screen, and the words start flying towards the tree. 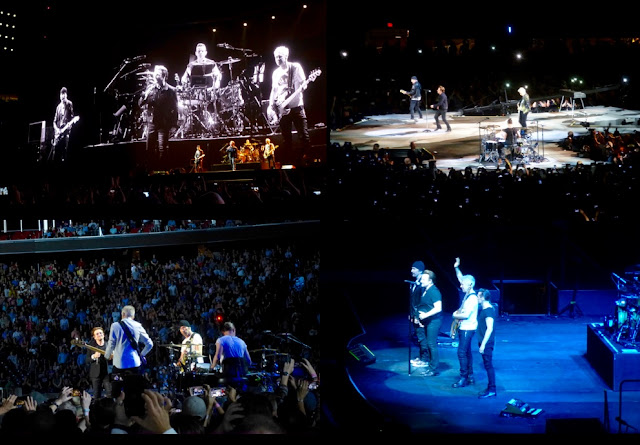 Eventually, the whole huge screen turns red, while the tree stays black and the opening notes of ‘Streets” starts to sound. Four Irishmen stand in front of the screen next to the tree and one of my favorite silhouette images ever comes to life, but then… the screen in all it’s glory starts projecting a road being traveled, and at that point I start bawling. The road eventually shows migrants walking and waving from the sides. The political commentary for the show is very symbolic throughout. 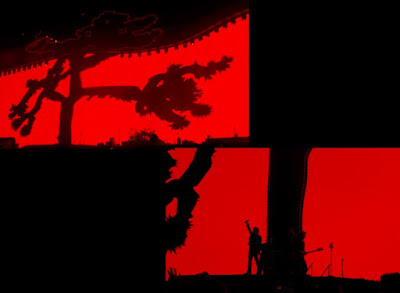 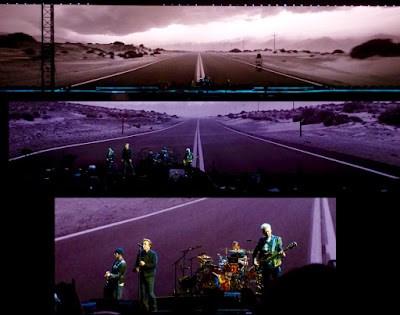 From the road, we move to desert forests for ‘I Still Haven’t Found…’ I don’t know if you heard the news, but the actual Joshua Tree from the album cover died recently. Corbjin really went all out with desert landscapes for the footage of the show. The most striking example is for ‘With or Without you’, where the band is completely inundated by gorgeous color images of Zabriskie point. That song has been played excessively, but one has to admit that heard in isolation, it is very pretty. 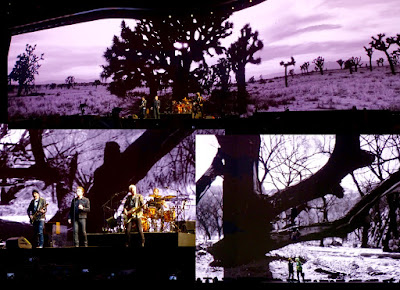 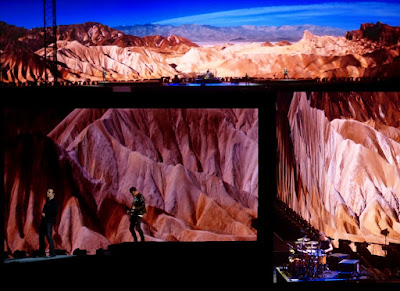 The most obvious political point gets made, as usual, with ‘Bullet the Blue Sky”. In most tours, they use relatively violent images, but in this one they went more symbolic by making citizens of all colors, shapes, and sizes wear a helmet and stand in front of an American flag. This being the anniversary tour, made them bring out the classic handheld spotlight. Thankfully, this time it was lighter, so Bono could sing while holding it and he didn’t injure himself. 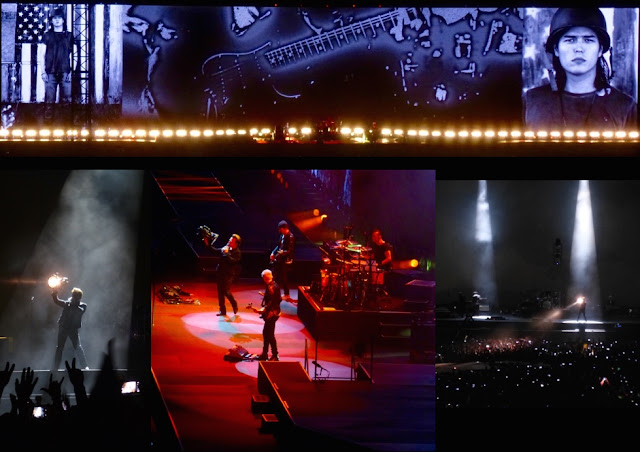 I believe ‘Running to Stand Still’ is one of Bono’s lyrical masterpieces. I never had a chance to listen to this song live before, so I don’t need to tell you how much I cried when I heard it in Houston. First dream come true. The visuals for this one were very subdued, mostly high contrast shots of the band members. Next comes ‘Red Hill Mining Town’, which is a song that I listened to a thousand times on my Joshua Tree tape back then, it is folksy, simple, and piercingly beautiful. Obviously Bono hasn’t had the pipes to sing this song in its original form for years. I have to say I am impressed of how well he solved the issue, it didn’t sound impossible. Second dream come true. The visuals were a very static shot of a Salvation Army brass orchestra.

We got back to the tree motive for ‘In God’s Country’, but this time in a crazy beautiful multi-colored night shot. I don’t know if you know the story, but Edge ended up marrying one of the belly dancers from the zoo tv/zooropa tour. When a beautiful cowgirl showd up on screen for ‘Trip through your wires’, I thought it could be Edge’s daughter, but no, it is that same dancer and I can’t believe she looks every bit as amazing as 25 freaking years ago. She proceeds to paint an American flag and then to perform some lasso tricks to this unusual sweet sexy song. 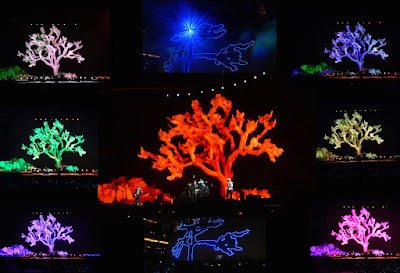 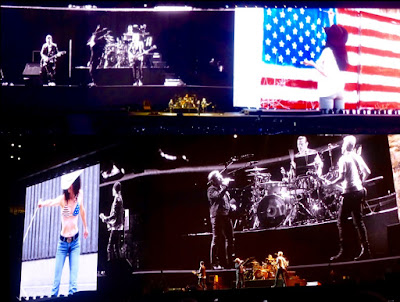 For ‘One Tree Hill’, they transported an homage to their Maori friend/employee (for whom the song was originally written) to the indigenous people of the US. They show scenes of a towering red moon with many images of indigenous people in the desert. Stunning. 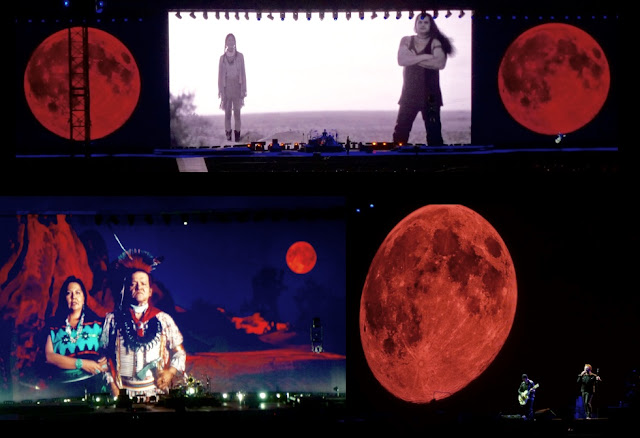 (warning: mixed language parragraphs)
For a brief moment, we saw a film projected on the screen, a con man called Trump riles up a town telling them he will build a wall to protect them. The footage is actually from a 50s TV series and I don’t understand how it is that nobody else has used it for anything in the past year. Eventually two hands reach in from the sides of the screen and preacher Bono proceeds to regale us with ‘Exit’. 'Exit' lleva años siendo una canción que me fascina. Puede ser la canción más oscura de U2. En todo caso, jamás de los nuncas pensé que la iba a escuchar en vivo, así que haberla escuchado TRES veces es un lujo enorme. Puede que sea mi parte favorita de Rattle and Hum. 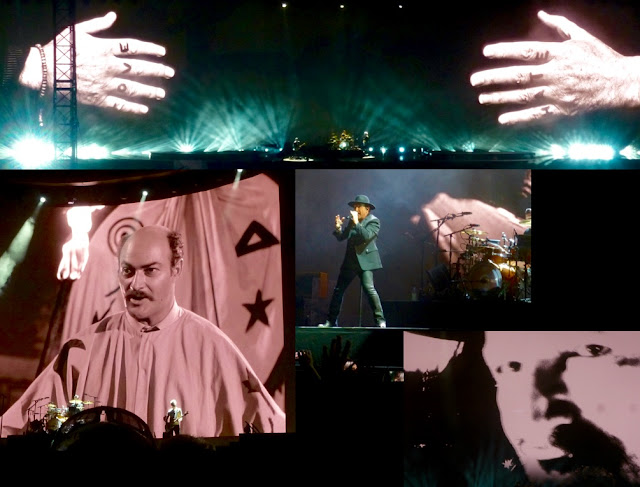 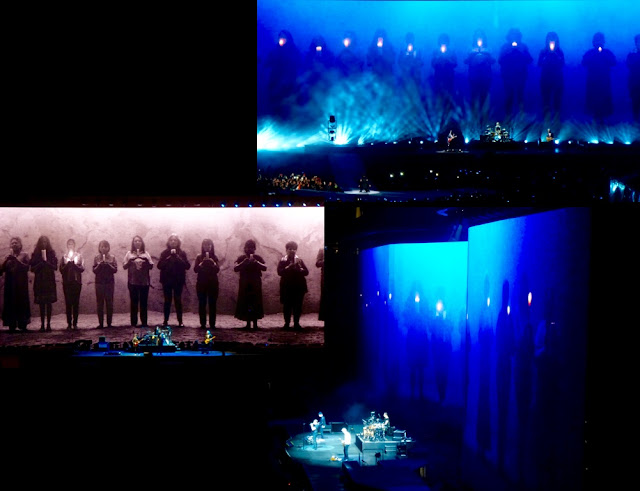 In summary: they managed to both evoke and modernize this wonderful album, their most "American" one, by using current American images and symbols. They have never been known to be a particularly nostalgic band, and I am so glad the decided to be one for this 30th anniversary. This album definitely deserved it.

The encore in the US shows was much better than in Mexico regarding the setlist, but not in the emotional aspect.

The encore started with audio of a young woman saying she wants the same things as every other person, just to live a good life, and that she thinks America is a dreamland. Cue ’Miss Sarajevo’ with footage of a refugee camp in Jordan, where the Syrian girl lives. A huge piece of fabric with her photo was passed from one end to the audience to the other while the song played. The band said they wanted to focus on a member of an "unwanted" group. 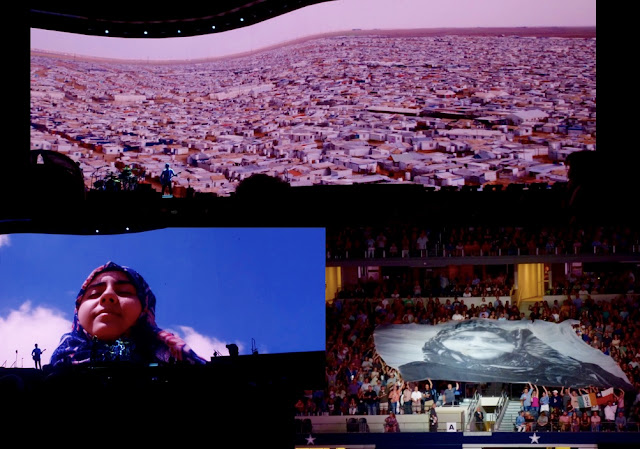 ‘Ultraviolet’ has always been performed only as an encore, but for this tour, they really hit it out of the park. The song turned into an homage to women, in particular visible women, beloved women, powerful women, pionner women. The cast of characters was tailored to different legs of the tour, and I wonder if it was even tailored by state in the US. There were a few prominent Texans in my shows. 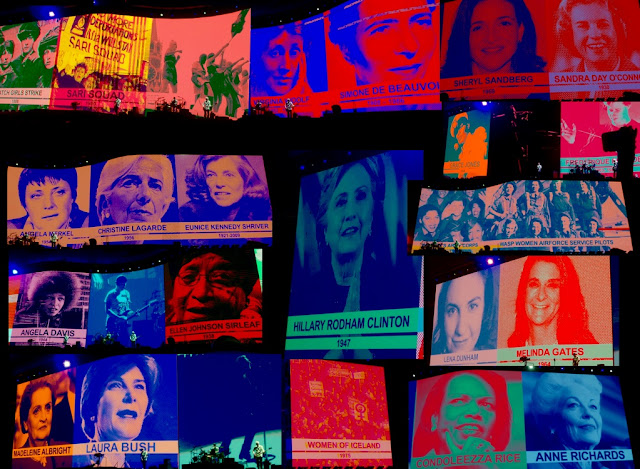 I have been a supporter of the “one” campaign for years. Getting HIV medication to Africa seems to me abut as good as a cause can get. In Texas, Bono gave a shoutout to Laura and “W” Bush because during that presidency the contribution of the US for that specific cause increased a lot. Anyway, it is always a pleasure to see the one word dispalyed in many languages. This time I finally managed to get enough images for a mosaic.

‘Beautiful Day’ is one of my least favorite U2 songs of all times, and they always play it. At least this time the visuals were cute. Elevation is slightly less bad, but not by much. Those albums are really an uninteresting period for them. 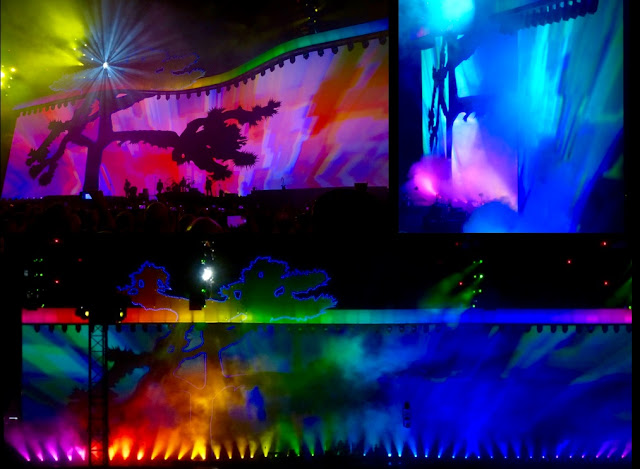 I would have chosen different songs for the encore, particularly for the post-Achtung baby ones, but  I was so happy to hear a whole album from beginning to end, that I'm willing to sacrifice the bookends. 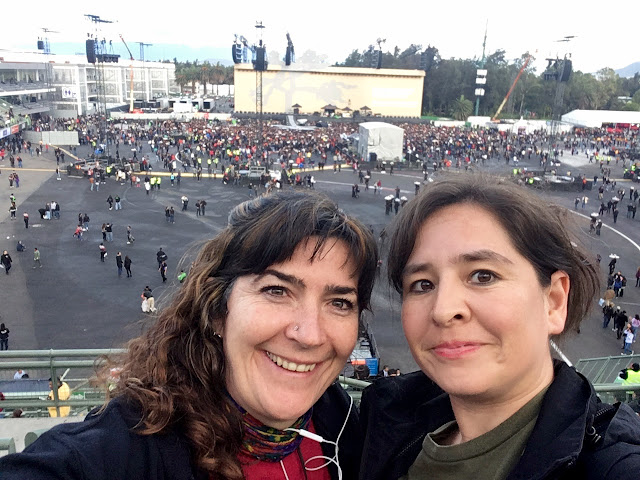 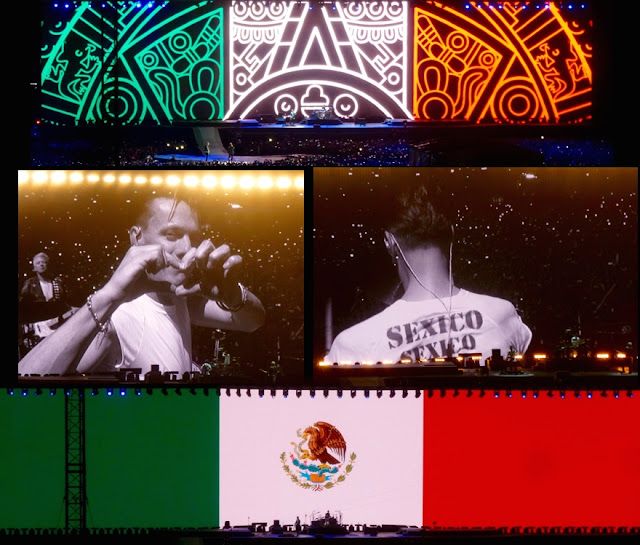 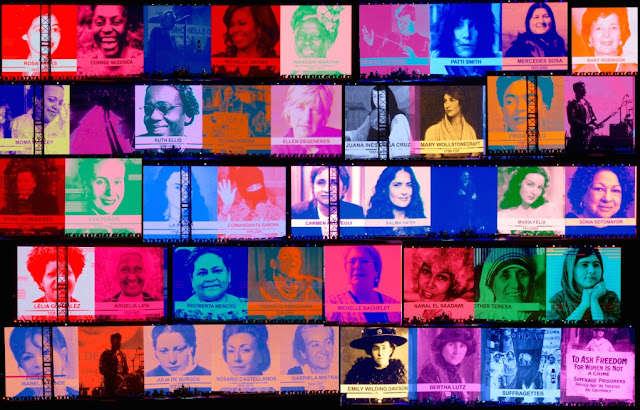 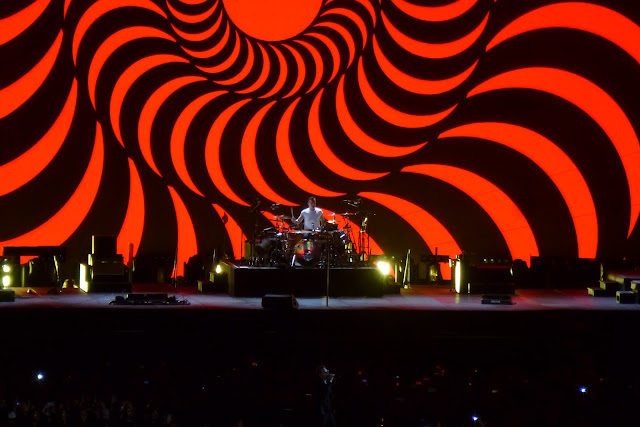 There's no such thing as too many U2 concerts for me.
Publicadas por Eva a la/s 3:04 p. m. No hay comentarios.: